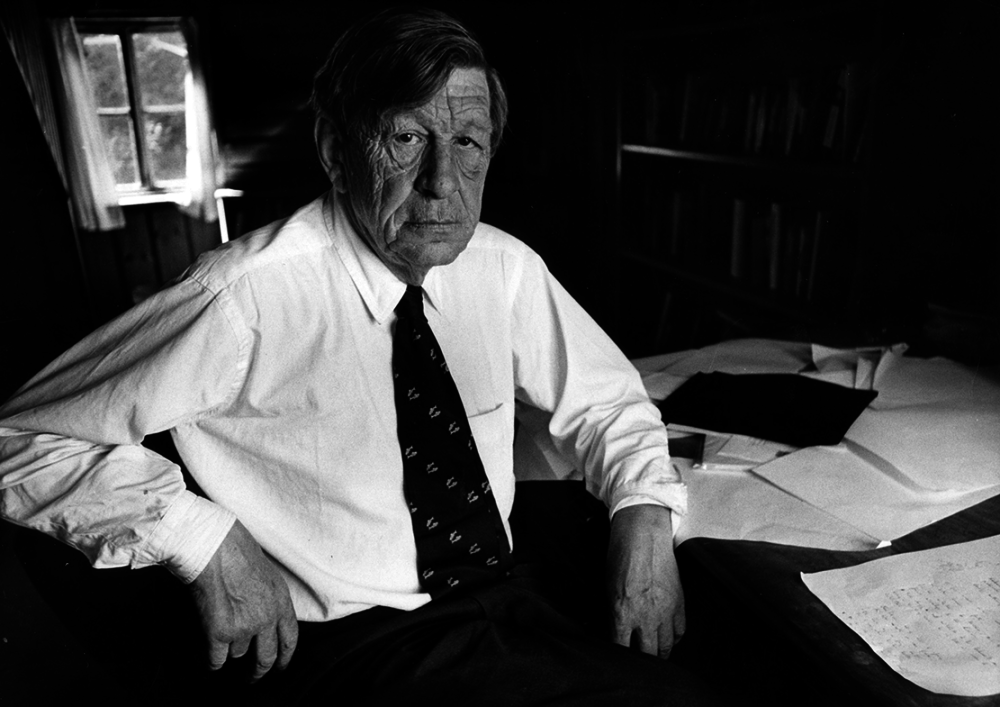 One of the hallmarks of a great artist is an often lugubrious disdain for their own work. The reclusive French composer Paul Dukas was self-critical to such a degree that he only allowed fifteen of his works to be published. Needless to say they have become much loved. Thomas Gray, of Elegy fame, was of the same tendency, allowing just thirteen of his works into the public sphere.

W.H. Auden’s output was far larger, but his own sense of failure was evident. He was disgusted by what he saw as his own intellectual weakness, moving to America in the late 1930s to get away from the stigma of the cliques of Bloomsbury. The signing of the Molotov-Ribbentrop pact made a mockery of the leftists he had been part of in Britain.  As he sat in a bar on Fifty-Second Street on the day of the Nazi Invasion of Poland, he lamented as the

Waves of anger and fear

Circulate over the bright

And darkened lands of the Earth,

The unmentionable odour of death

September 1 1939 was one of Auden’s three supposedly ‘political’ poems, describing the eerie reality that faced the negligent West. His account of the Soviet-backed invasion of Czechoslovakia, August 1968 depicted the gruesome ‘ogre’ of totalitarianism and Spain (1937) described his experiences of the Spanish Civil War.

These three different indictments, written at times of great upheaval and with unquenchable pathos, became among Auden’s most well-renowned works, but he dismissed them. Despite its wide popularity, September 1 1939 was not allowed to be republished in almost all anthologies of his work. He thought the work to be egotistical and sanctimonious. For one rare book it was given permission to include, Auden changed his famous line to ‘we must love one another and die.’ In another small selection of his works, there was a note, affirming that, ‘Mr W.H. Auden considers these five poems to be trash which he is ashamed to have written.’

Auden was ashamed of his tenure as the enfant terrible of the intellectual classes in the ‘30s, although his apparent conversion was not always welcomed. Philip Larkin thought that after he had moved to America and the depression of the Second World War had set in, Auden’s poetry become worse, ‘rambling intellectual stew.’ It is certainly true that in his later life, Auden became more reclusive, as his range of poetic styles increased.

Auden has an almost conflicted image of poetry. He uttered In Memory of W.B. Yeats that ‘poetry makes nothing happen’. That remark had been made earlier as well, in an imaginary courtroom scene of the The Public v. The Late Mr. William Butler Yeats, in which Auden is scathing about

The fallacious belief that art ever makes anything happen, whereas the honest truth, gentlemen, is  that, if not a poem had been written, not a picture painted nor a bar of music composed, the history of man would be materially unchanged.

He no longer saw it as such a powerful agent of political change, and more of an intellectual exercise, but carried on as a poet and not a writer. He encouraged Edward Upward to do the opposite, despite his prowess at Cambridge University. Upward would later say that ‘writing is not a pleasure. It’s a discipline.’ That attitude may well have been similar to Auden’s towards poetry.

The self-criticism that Auden inflicted upon his most celebrated poetry may well have had its roots in his despisement of the public persona that the London establishment had given him. The ‘Auden Group’ was a journalistic fallacy that never existed in proper form. The four other ‘members’ were Stephen Spender, Christopher Isherwood, Cecil Day-Lewis and Louis Mac-Neice. Together they created the literary and political scene of the nineteen-thirties, and were all of leftist disposition. Auden and Isherwood maintained a lifelong relationship, and all were involved with each other in literary pursuits. The idea of a faction was, however, false.

The latter part of that ‘low, dishonest decade’ for Auden were turbulent. He conveniently married Erika Mann to escape Nazi Germany (his homosexuality being one reason) and in 1937 joined George Orwell in going to Spain, but his only spectated on the brutal Civil War.

When Auden and Isherwood sailed together to America in 1939, they were met with resentment from many back in England, who accused them both of fleeing from the storm of war approaching Europe. This may have been true, but Auden later informed the British Embassy in Washington that he would go back to England and fight if necessary, but his services were not required. His reasons for emigrating were not solely focused on the ensuing World War, Auden had grown to intensely dislike life in the London literary scene. His hatred of fascism had been ingrained long before; he thought that Hitler’s Germany was being governed ‘by a mixture of gangsters and the sort of school prefect who is good at Corps’, a spiteful reference to his miserable days at the Gresham’s School in Norfolk. When once told by his headmaster that the school he attended represented the “cream” of British society, Auden acerbically replied ‘yes I know what you mean – thick and rich’.

Auden was a deeply skeptical poet. He was almost constantly fighting against many of the images that people portrayed him as, and changed his beliefs. Having left the Anglican Church aged fifteen, realising that his interest in religious matters had decreased, he became a member of the Episcopal Church around the start of the War. Faith never played a large part in his work, but it helped to come to terms with himself.

Auden’s work was written for the moment, and his most famous poems were often melancholy in their sorrow at the political situation he was faced with. The poem he wrote whilst ‘uncertain and afraid’ in that New York bar was used in the immediate aftermath of the September 11 attacks in 2001, the sorrowful message of a culture in shatters used to full effect. Auden’s ability to see through the turbulent times he was living through gave him a public popularity among the twentieth century English poets.

The bitter irony of his career is that his most famous and best-loved poems are those which he himself detested. His intense self-criticism and hatred of what Orwell called the ‘smelly little orthodoxies’ that often dogged his literary life nevertheless meant that he was able to create the most moving poetry of the century. Auden once asked ‘Who can speak for the dumb?’ Throughout his life and after it, many found a comforting voice in his most sorrowful, elegiac verse.