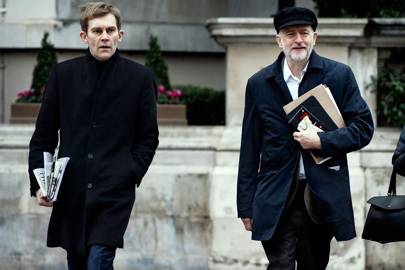 Some of the most hardline political fanatics are also men of habits.

Everyday, Seumas Milne comes to work and goes into the Caffe Nero in Portcullis House. He orders two espresso shots. One he drinks there, one he takes upstairs, either to his office opposite Parliament, or to a private HQ in the Norman Shaw Building along the Embankment, where he heads up the Corbyn team as the Director of Communications and Strategy. He is known in Westminster as the mainly cool-headed, enigmatic leader of the march to put Jeremy Corbyn in power at N10, but his motives have never been hard to find.

Like many of his fellow Corbynistas, Milne was born into the heart of the left’s establishment clique. His father, Alisdair, was the Director-General of the BBC, enduring many clashes with Margaret Thatcher at the time. He followed in his father’s footsteps to Winchester College, on a large scholarship. Despite the public school atmosphere, it was here when his first taste of hard-left politics came into action. He stood in the School Mock election as the Maoist candidate in 1974, but with limited success. He went onto to Balliol College, Oxford, one of the most academic in the country, and went onto to get his first glimpse of radical politics. Milne went to Palestine, and to this day lapses into the accent of his comrades in the region. He joined the staff of Straight Left, a Soviet-supporting monthly, before moving to the Economist in 1981. He disliked the paper’s free-market stance, and moved to the Guardian three years later, where he stayed for over thirty years. He started as a reporter, defending pro-Soviet dissident Richard Gott, and had roles as labour and comment editor, publishing two books in the process. The Enemy Within in a vociferous defence of Arthur Scargill, accusing the government of infiltrating the Miner’s Union. Milne established himself at the Guardian as an enigmatic, mutinous hard-left figure, who was never happier than when plotting the overthrow of the established order.

Jeremy Corbyn did not have Milne as his first choice to lead his new radical party. He wanted to acquire the Mirror’s Kevin Maguire, but he rejected the offer. Milne was seen as a dangerous player, out of touch with most of Fleet Street having spent so many years in the relative shadows. He was supportive of Corbyn, but the two had never been close comrades. Milne was given the task of transforming Corbyn, seen as a eccentric neo-Stalinist, into a viable political figure.

It started with the suits. Milne is always dressed smartly, draped in the distinctive long black jacket, whereas Corbyn was always more casual. Now the leader is almost always in more formal attire, something that has come from Milne’s image rebrand project. He has managed to gain the respect of many in Westminster for his mild-mannered approach to the press, but is still much distrusted by the Parliamentary Labour Party. He is deeply rooted in the foundations of the modern party, despite reportedly only becoming a member a short time before Corbyn became leader. He blocked out any Tories from the Labour In campaign during the 2016 referendum, to the great annoyance of those trying to persuade Corbyn to give his full-throated support, and was blamed heavily in the attempted coup after the result. He masterminded the partial success of the 2017 result, but his tenure has been controversial. He is among a group of spin doctors and advisers who are the most important people in Britain that the large majority of Britons have never heard of. He wilds large influence over many of Corbyn’s political tactics, and is known as a bedrock of his principles, able to make Corbyn’s message more eloquent and coherent.

Seumas Milne has always loved plotting for the revolution. For years he sat on the sidelines, with a weekly column in the middle pages of the Guardian his only way to promote the message of radical socialism. For the last fours years he has been intimately involved with the Corbyn campaign, and if his plan comes to pass, it will have a huge, dangerous effect on the country. Milne may not be the most obvious of political forces, but he is astute enough to get his way, and Jeremy Corbyn is his menacing plaything.

One thought on “Seumas Milne: The Man who Controls Corbyn’s path to power”