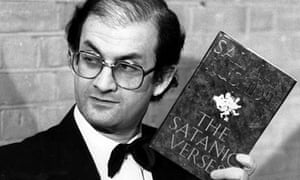 Thirty years ago this week, the Ayotallah Khomeni issued a fatwa against the the author Salman Rushdie, offering a $6 million bounty on his blasphemous head to anyone who murdered him. Rushdie survived the plot, after spending years in hiding, but others involved with the publishing of his book, the Satanic Verses, were stabbed and blown to pieces in the subsequent furore. Many saw it as the first time that what became known as ‘Islamofascism’ had become known to the West. It also exposed the reluctance of many Western liberals to defend free speech when the danger was coming from those they were scared to attack. Christopher Hitchens, a personal friend of Rushdie said later that:

It was, if I can phrase it like this, a matter of everything I hated versus everything I loved. In the hate column: dictatorship, religion, stupidity, demagogy, censorship, bullying, and intimidation. In the love column: literature, irony, humor, the individual, and the defense of free expression.

Rushdie himself commented that ‘it would be absurd to think that a book could cause riots’ just before the publication in 1988. He was of course to be proved wrong and the ‘clash of civilisations’ that followed, between supposedly mainstream, accepting Western tradition, and the Islamic intolerance of dissent, has continued to today. The same censorship is obvious in the Charlie Hebdo attacks in 2014 and the killing of Jamal Khashoggi last year. The splits that caused such deadly uproar have lived on in the polarisation between orthodox Islam and the right we see today. ‘Liberals’ failed to live up to their name in the face of what should have been their most vociferous moment, and their failure to do so has been a hallmark of the gradual decline of liberal-left though in the West. Hitchens, left disgusted by his former allies’ reluctance to speak up, deserted the mainstream political left. Rushdie, having seen those who promoted his book bullied, intimidated and some murdered, issued a grovelling apology, which was rejected by the Ayatollah. The bounty on his head offered by Iran still remains to this day.

The Satanic Verses controversy was the first event of what has become a major staple of modern journalistic life. Barely an eyebrow is raised today when a dissenting voice is silenced under the thumb of a theocracy, when a particularly inquisitive author is threatened with revenge for publishing blasphemous material.

The case of Asia Bibi that has come into Western focus over the last year is yet another case. When the Pakistani Supreme Court announced that she will not face the gallows after almost a decade on death row, it caused social uproar in the highly Islamic country. Harrowing videos show mass protests, with placards urging the state to murder Bibi immediately for crime, a minor incident with a co-worker in 2009. The government soon gave in, doing a deal with the leading group calling for her murder, barring Bibi from going out of Pakistan. Britain, disgracefully, did not offer her asylum, amid concerns over potential attacks. America didn’t either. Justin Trudeau, the very definition of a died-in-the-wool liberal, accepted Bibi, but she is still stranded among those who want her dead.

Ayaan Hirsi Ali, who escaped the brutal religious methods of female indoctrination in Somalia and became a successful woman in the Netherlands, is another case in point. Having seen her friend Theo van Gogh murdered on the streets of Amsterdam, Hirsi Ali was told she was the next victim on the note left over the dutch filmmakers dead body. Requiring constant police protection, Hirsi Ali had her protection removed and she sought asylum in America. Evidently, a free and liberal country such as the Netherlands, which gave refuge to Spinoza and Descartes, sees the protection of freedom of speech as a price too high to pay for appeasing religious extremism.

Postmodern liberalism disregards the freedoms it purports to espouse. They are scared of standing up to the big bullies, preferring to after the small targets in their eternal culture war. The Satanic Verses uproar was the first time their fright was directly exposed. It was the first time they had seen the wrath of a powerful theocracy in the face, and they backed away from it. Events since have shown that unless they are willing to stand up for the values which were once regarded as central to the liberal cause, there is little point in regarding them as such. The slow intellectual and moral decline of Western liberalism has had the Satanic Verses as a helpful footnote to describe the wider display and incompetence and defeatism. It will take some doing to stem that tide.